The Dutch Way – How Kloepfel works in the Netherlands 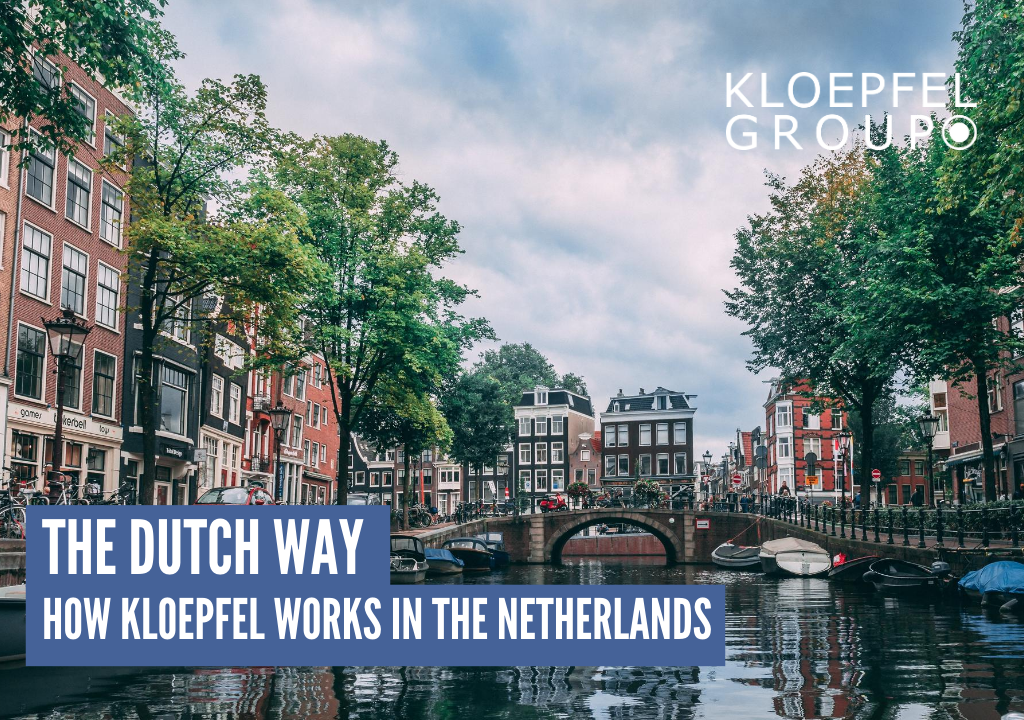 Kloepfel is on the road to international success – and since 2019 also represented with a location in the Netherlands. From here, Kloepfel Benelux successfully advises European customers – also beyond the Benelux countries, as a project with the UK customer Thetford shows. Like every country, the Netherlands brings its own peculiarities with it. A conversation with Peter Smit and Martijn Heijmans about long-standing customer relationships, short distances and why it is better to ride a tandem.

1. Kloepfel Benelux is a joint venture of the German Kloepfel Consulting and the Dutch Procurement Services. How does the cooperation work?

Martijn Heijmans (Procurement Services): We help each other to win customers and usually carry out the projects together. This fits together perfectly, both professionally and personally. The chemistry is just right. I think the customers notice that too.

2. Kloepfel already advises in many countries like Switzerland, Slovakia and China. What makes working in the Netherlands special?

Peter Smit: China is a good keyword – the largest country in the world! The Netherlands are really small in comparison and have an area comparable to Lower Saxony. This alone brings with it a few peculiarities: While you can often only have one customer appointment a day in Germany due to the long distances, in the Netherlands you can sometimes have up to three visits.

Martijn Heijmans: That also means a certain comfort for the consultants. It is often possible to return home in the evening instead of going to a hotel. I think this is also one of the reasons why our employees like to make long-term commitments with us. We have an extremely low fluctuation rate.

Peter Smit: That does not just apply to our employees! One of the special features here is that we conclude comparatively long contracts with our customers – usually three to five years. This gives us a completely different scope for implementation. In Germany, it is often the case that a project is successfully implemented within a few months, mainly through direct negotiations. You have just gotten up to speed and got to know the customer – and then it’s over again. What remains are thousands of ideas for the drawer.

Martijn Heijmans: In the Netherlands we implement them.

Peter Smit: Exactly! Because our contracts will allow us to do that. Kloepfel stands for consultants who fit in as good temporary colleagues in all countries. In the Netherlands this is also true, but in the long term.


3. Are there also differences to Germany in terms of the clientele?

Peter Smit: We are focused on manufacturing companies and these account for 25 percent of Dutch GDP. In Germany it is 50 percent. This means that there is less customer potential here in both absolute and relative terms. This makes it even more important to be convincing in acquisition and to value each customer individually.

Martijn Heijmans: This is the only way to achieve the long-term contracts that distinguish us.

Peter Smit: You said it.

4. What was the path to the Dutch location, where did the idea come from?

Martijn Heijmans: That is a beautiful question!

Peter Smit: Yes. Well, I worked for many years as purchasing manager at the Dutch company Lely. During this time, I got to know Kloepfel and also Procurement Services through joint projects. After eight years with Lely, I was ready for the next station and during a dinner with Marc Kloepfel and Duran Sarikaya at the Italian restaurant it became clear: I am coming on board! After two projects at Kloepfel in Germany, the expansion plans for the Netherlands and Belgium were already in place. Procurement Services immediately came back to my mind. We met again for lunch, this time with Martijn Heijmans, André Seltenrijch from Procurement Services, Duran and Marc.

Martijn Heijmans: You even said it was the same Italian! Yes, it was fascinating: Marc and Duran told us about their career in Germany, about your customer profile. And André and I looked at each other and thought: This is like a reflection of Procurement Services! Our company has been in existence for 15 years, but our range of products, customers and focus were amazingly similar. A real mind blowing experience! We quickly agreed to cooperate in the Kloepfel expansion.

5. Are there already first successes?

Peter Smit: First of all, it must be said that the first project is of course super important for a young company. If the customer is dissatisfied with it, the start-up simply has a problem. That’s why we worked really hard together, felt around the clock. Our first customer was Nooteboom Trailers B.V. in Wijchen. The company immediately trusted us with a complete procurement cost optimization project. The expectations were high.

Martijn Heijmans: Fortunately, that paid off. The Supplier Convention that we held for the customer went extremely well. We were able to introduce the suppliers to the storyline, give them an overview and thus earn their trust. In the negotiations we were able to achieve savings of 1.8 million euros in the first phase. That was phenomenal.

Peter Smit: We also held a supplier convention at our customer Thetford Ltd. – digitally this time. The customer was again very satisfied and we were able to achieve great savings even without a personal meeting.

6. What has been the biggest challenge so far?

Peter Smit: All beginnings are difficult: On our first project we didn’t had many nights of sleep. Procurement Services helped us and also provided personnel for direct purchasing.

Martijn Heijmans: Of course, every sales meeting is always a small challenge. We do many of them together and find out: Why do customers want Kloepfel at all? How do you convince the customers?

7. What motto is used to convince the Dutch of Kloepfel?

Peter Smit: We like to say: ” Als tandem staan we sterker”, which means: “It rides better with the tandem”. What we want to say with this is: Team spirit comes first, both internally with the colleagues from Kloepfel and Procurement Service, and at Kloepfel Benelux with the customer. Together we achieve amazing savings – as “Lange termijn collega’s”, long-term purchasing colleagues.

Martijn Heijmans: Whereby it has to be said that for most Dutch people Kloepfel has to be spelled out first. This German name is known here – still! – not many people here know this German name – yet! And precisely because it sounds so German to the Dutch, they associate it with German values such as thoroughness and order. This is the “Country of Origin” effect and certainly an advantage. Especially since we really live these values.

8. Hand on heart: do you now cycle to work more often?

Peter Smit: Yes, that would be nice! Above all, there are also increasingly great bikes – scooters, e-bikes and so on. In reality, however, most customers are so far away from home that there isn’t even a train station nearby. In villages, small towns.

Martijn Heijmans: That’s right, it does not work without a car, even for Dutch people – even if the journey by tandem would be very nice!

Mr Smit, Mr Heijmans, thank you for the interview!

Change of supplier – How to overcome internal resistance