In August, the weighted average price of crude oil fell by 6.3% (in euros: -5.5%) to USD 57.85 (EUR 52.00) per barrel. Brent crude oil, the European crude oil, was the most expensive. The price of Brent fell by 7.4 % (in euros: -6.7 %). Crude oil from the Middle East, the Dubai reference oil price, fell by 6.7 % (in euros: -6.0 %). The price of American crude oil of the West Intermediate Texas (WTI) grade fell least sharply. The price of WTI fell by 4.7% (in euros: -3.9%). Overall, the production cuts of OPEC+ decided at the beginning of July 2019 were largely maintained, with individual countries exceeding their quotas. The International Energy Agency (IEA) anticipates a surplus supply on the crude oil market of up to 1.4 million barrels. It assumes that OPEC and its partners could again expand their production cuts by the end of the year in order to stabilize the crude oil price at a level of 60 US dollars. Concerns about a worsening global economy continue to weigh on crude oil prices.

As in the previous month, the monthly average price for natural gas changed relatively little in August. It fell (in euros: rose) by only 0.4 % (in euros: +0.4 %) compared with the previous month, with US natural gas falling by 5.6 % (in euros: -4.8 %) and European natural gas rising by 7.8 % (in euros: +8.7 %). The average coal price fell by 9.0 % (in euros: -8.3 %). This was due to weak demand from China and Europe, price pressure from excess liquefied natural gas (LNG), rising Russian export volumes, rising Chinese production volumes and other factors. In the future, demand from India is expected to continue to fall. India is the second largest coal importer in the world and would like to promote environmental protection and strengthen its own coal production in the coming years. In August, the index for energy raw materials fell by 5.8 % (in euros: -5.0 %) to 105.7 points (in euros: 105.4 points).

The index for industrial raw materials is divided into the index for agricultural raw materials, the index for non-ferrous metals and the index for iron ore and steel scrap. The agricultural raw materials index fell by 5.7% in August (in euros: -4.9%) compared with the previous month. In particular, prices for wool, rubber, sawn timber and cotton fell. Wool fell by 12.2 % (in euros: -11.5 %). From 1 September 2019, the USA will impose an increased penalty rate of 15% on imports of wool products from China instead of the announced 10%, with the USA importing a large proportion of the wool products from China, especially for the autumn and winter seasons. China is one of the main importers of Australian wool. The supply of Australian wool remains good and Chinese stocks well filled. The recent increase in import duties is making Chinese wool export products for the US market more expensive, and demand is therefore expected to fall, especially for the Christmas business in the USA. The price of cotton also fell. It fell by 6.3 % in August (in euros: -5.6 %). The price of sawn timber fell by 9.5 % (in euros: -8.7 %) after a particularly strong rise in the previous month. Rubber fell by 7.8% (in euros: -7.0%). One of the main factors currently causing the price of rubber to fall is the fact that demand for rubber from China, the world’s largest rubber consumer, fell significantly. This is not least due to the fact that Chinese tire production this year has so far been around 8% lower than in the previous year and passenger car sales in China have also fallen significantly in recent months. In addition, the effects of the customs disputes between the United States and China, which are becoming increasingly noticeable in China and also in the United States, are also dampening expectations of demand. By contrast, the price of hides and skins rose by 11.7% (in euros: +12.6%) after falling in the previous months. Only the price of pulp remained relatively constant compared with the previous month. Overall, the monthly average index for agricultural raw materials fell by 5.7 % (in euros: -4.9 %).

By contrast, the index for non-ferrous metals fell by only 1.4% in August ( in euros: -0.6%). On a monthly average, however, the price of nickel rose by 16.5% (in euros: +17.5%). Indonesia is considering to introduce an export ban on nickel planned since 2014 for 2022, possibly at the end of this year. With this measure, Indonesia plans to increase the domestic value added of unprocessed nickel from one third to two thirds. This would remove one fifth of the supply from the international market. The demand for nickel continues to be high due to the production of batteries, above all from China, and LME inventories are still at a seven-year low. In addition, a possible mine closure in Papua New Guinea due to environmental pollution will further burden the supply. In addition to nickel, only lead was able to record a price increase. Lead prices rose by 3.6% (in euros: +4.4%). On a monthly average, the other non-ferrous metals listed in the index recorded falling prices. Tin fell by 8.0 % ( in euros: -7. 2). The zinc price fell by 6.8 % (in euros: -6.1 %). The copper price fell by 3.9 % (in euros: -3.1 %). 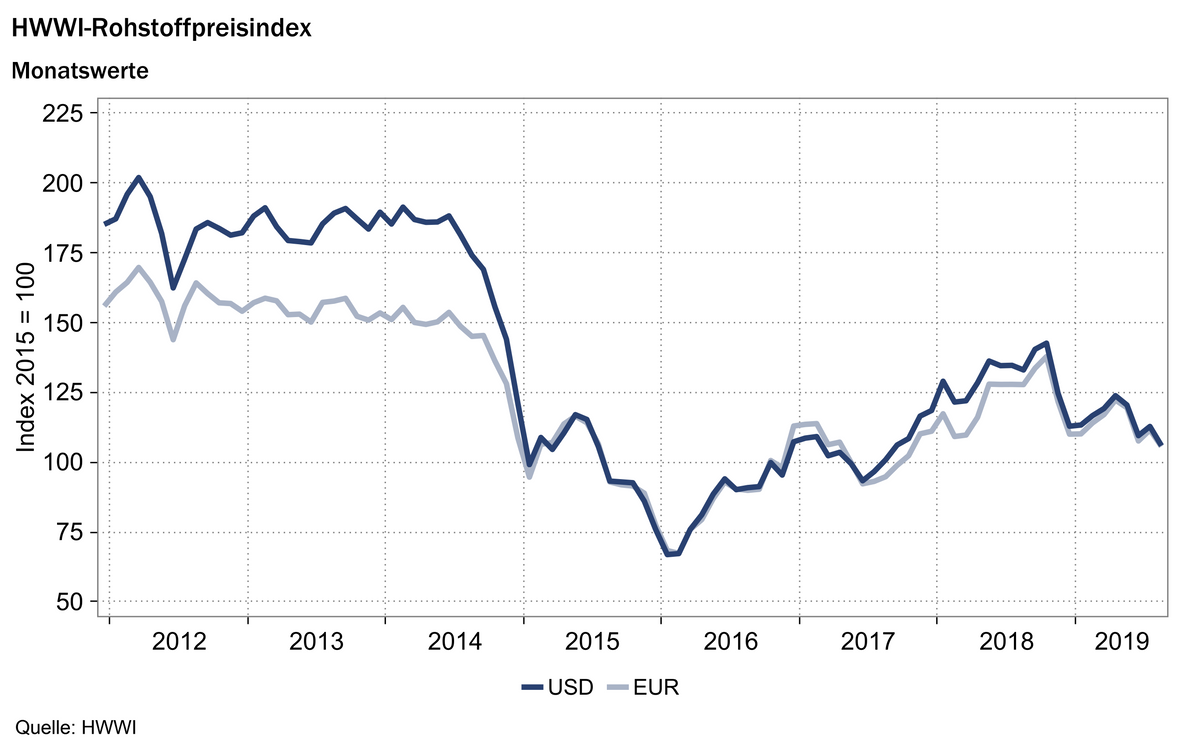 As in July, the price trend for raw materials included in the index for food and beverages was mixed in August. The trade conflict between the US and China weighed on price formation. The mutual tariffs increase import prices and lead to falling demand. Barley, corn, wheat, cocoa and coffee recorded particularly large price reductions. Good harvests, high inventories, lower exports and declining demand, especially from China, are responsible for the price decline, especially for cereals. The barley price fell by 15 % (in euros: -14.3 %).

Corn prices fell by 12.0% (in euros: -11.2%). The price of wheat fell by 9.1% (in euros: -8.4%). Positive growth conditions have increased the prospects for good harvest results for cocoa and coffee. Expectations of excellent harvests, also in West Africa, caused the cocoa price to fall by 9.1% (in euros: -8.3%). As fears of weather-related losses in the coffee harvest in Brazil were not confirmed, the coffee price fell by 6.7 % (in euros: -5.9 %). On the other hand, strong price increases were observed for coconut and palm oil. The price of palm oil rose by 8.9 % (in euros: +9.8 %). The conflict between the European Union and the palm oil-producing countries Malaysia and Thailand in the previous months had rather nourished expectations of falling demand. Current reports of rising demand caused the price of palm oil to rise by 8.9 % (in euros: +9.8 %). The price of coconut oil rose by 8.5 % (in euros: +9.4 %). The reason for this is raising demand, above all from Europe. In August, the index for food and beverages fell again. It fell by 5.1 % (in euros: -4.3 %) to 86.3 points (in euros: 86.0 points).

The incredible purchaser bet for a good cause: Bet €…