(Hamburg, May 17, 2021) The HWWI Commodity Price Index remained almost unchanged in April compared to the previous month, rising by only 0.9 % on average. The index was thus 138 % higher than its value in April 2020, when the first global lockdown led to an extreme decline in commodity prices. Nevertheless, commodity prices were also influenced by the global Corona pandemic last month. In particular, the rapid increase in Corona infections in India, a major player in international commodity markets, increased uncertainty in the markets and put pressure on prices. Conversely, continued vaccination successes in Europe and the USA, as well as ongoing economic growth in China, provided a positive global economic outlook and thus had a stabilizing effect on energy and industrial metal prices. The sub-index for energy commodities moved sideways in April and rose by only 0.3 % on average compared to March. The sub-indices for industrial raw materials as well as for food and beverages rose on average in April but recorded only moderate growth rates compared to their previous month’s developments. 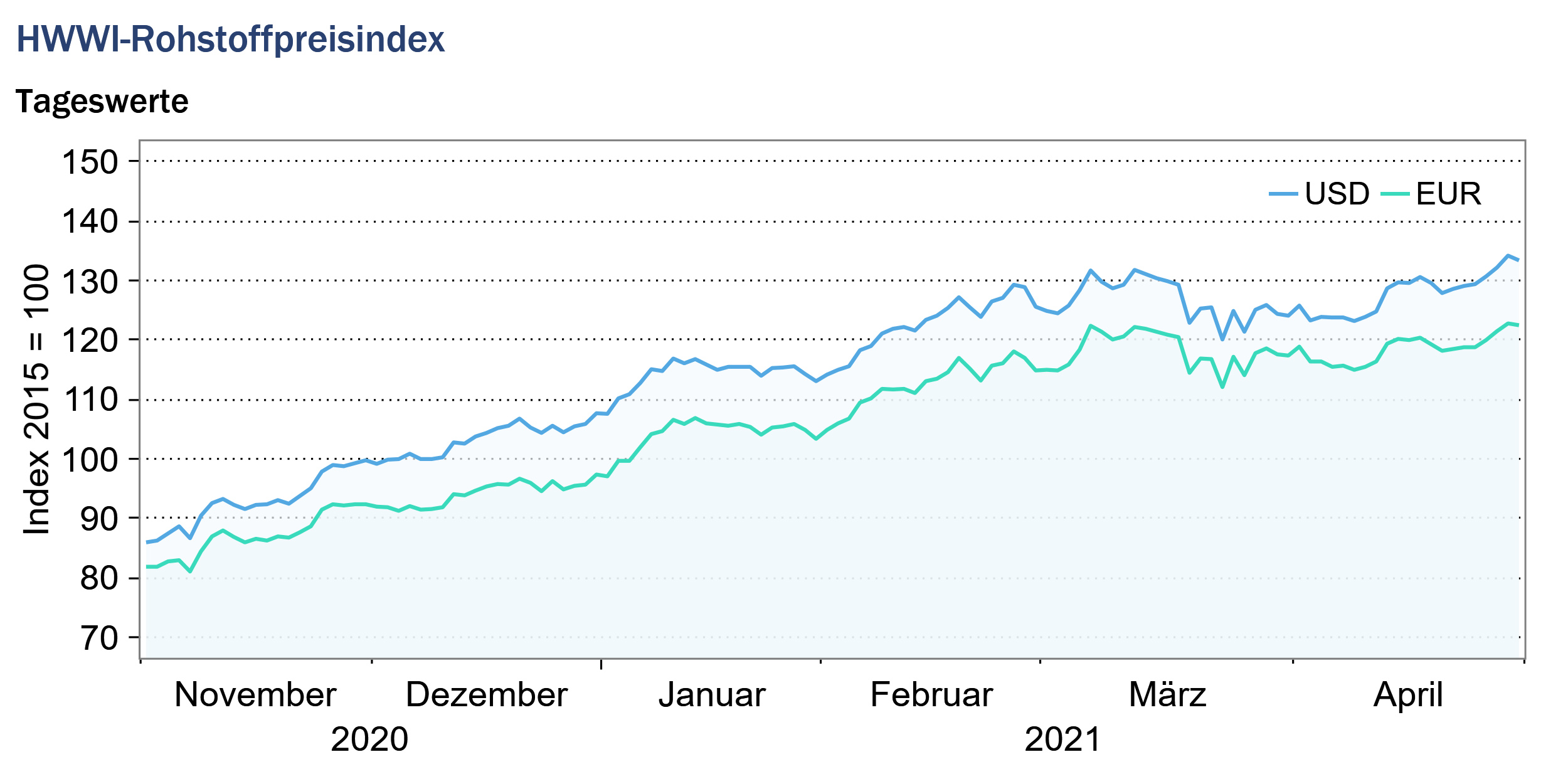 Also in April, the crude oil markets were influenced by the global developments of the Corona pandemic. On the one hand, the progressing Corona vaccinations in many countries supported prices on the crude oil markets as they strengthened hopes that the Corona pandemic would soon be overcome. A further recovery of the global economy would be accompanied by an increase in crude oil demand. On the other hand, the dramatic increase in Corona infections in India depressed crude oil prices. Since India is the world’s third largest importer of crude oil, a slowdown in Indian economic activity, accompanied by a decline in crude oil consumption, would lead to price reductions. From the supply side, crude oil prices continued to be supported by OPEC+ countries’ production cuts. From May onwards, however, the production cuts of the OPEC+ countries are to be gradually lifted again, so that an increase in crude oil supply is to be expected. Due to the different market signals, crude oil prices tended to move sideways in April and fell by an average of only 1% compared to the previous month. The prices for the European reference grade Brent moved around the USD 65 per barrel mark in April and were quoted at just over USD 60 per barrel at the end of the month. The prices of the American reference grade WTI moved around the monthly average of USD 61 per barrel and ended the month at USD 53 per barrel. 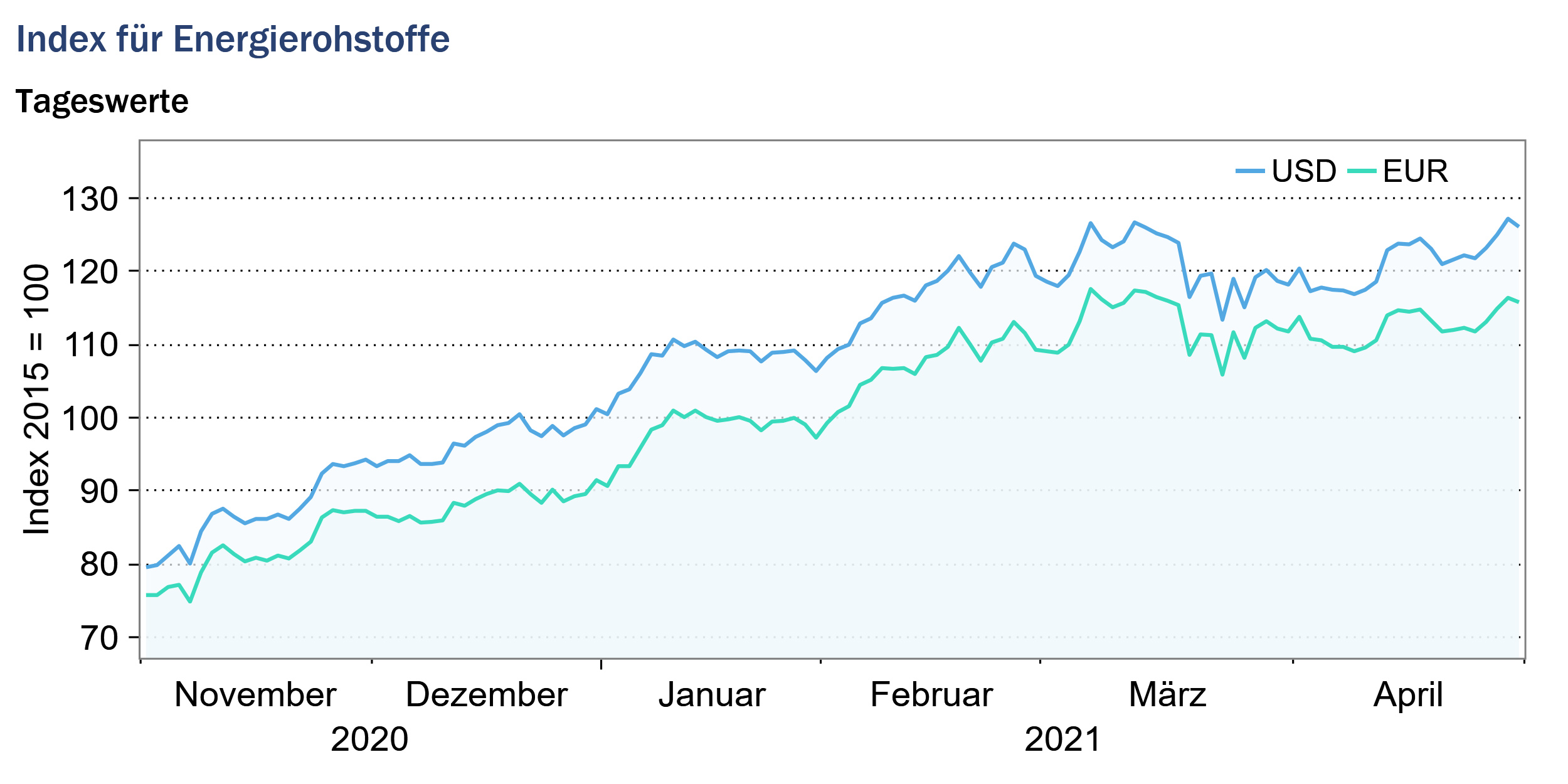 The index for industrial raw materials is divided into the agricultural commodities index, the non-ferrous metals index and the iron ore and steel scrap index.

The sub-index for non-ferrous metals recorded an average increase of 3.9 % in April compared to the previous month, with the strongest price increases being observed in the markets for aluminium, copper and tin. The price increases were supported on the one hand by the ongoing recovery of the global economy, driven in particular by developments in the USA and China, but also reflected supply shortages. On the aluminium markets, a decline in Chinese supply is expected, as China wants to reduce its particularly energy-intensive aluminium production for reasons of climate protection. On the copper markets, in addition to high demand, supply restrictions as a result of the Corona pandemic continued to drive prices. In Chile, where about a quarter of the world’s copper is mined, port workers recently called a strike, which further tightened supply.

Pulpwood and sawn wood prices continued their positive trend in April. Sawn wood prices increased on average by more than 10 % compared to March. Demand for sawn wood, especially from China and the USA, continues to increase and is additionally supported by the economic stimulus packages launched worldwide. In addition, there were supply bottlenecks for wood due to a current container shortage at the world ports. 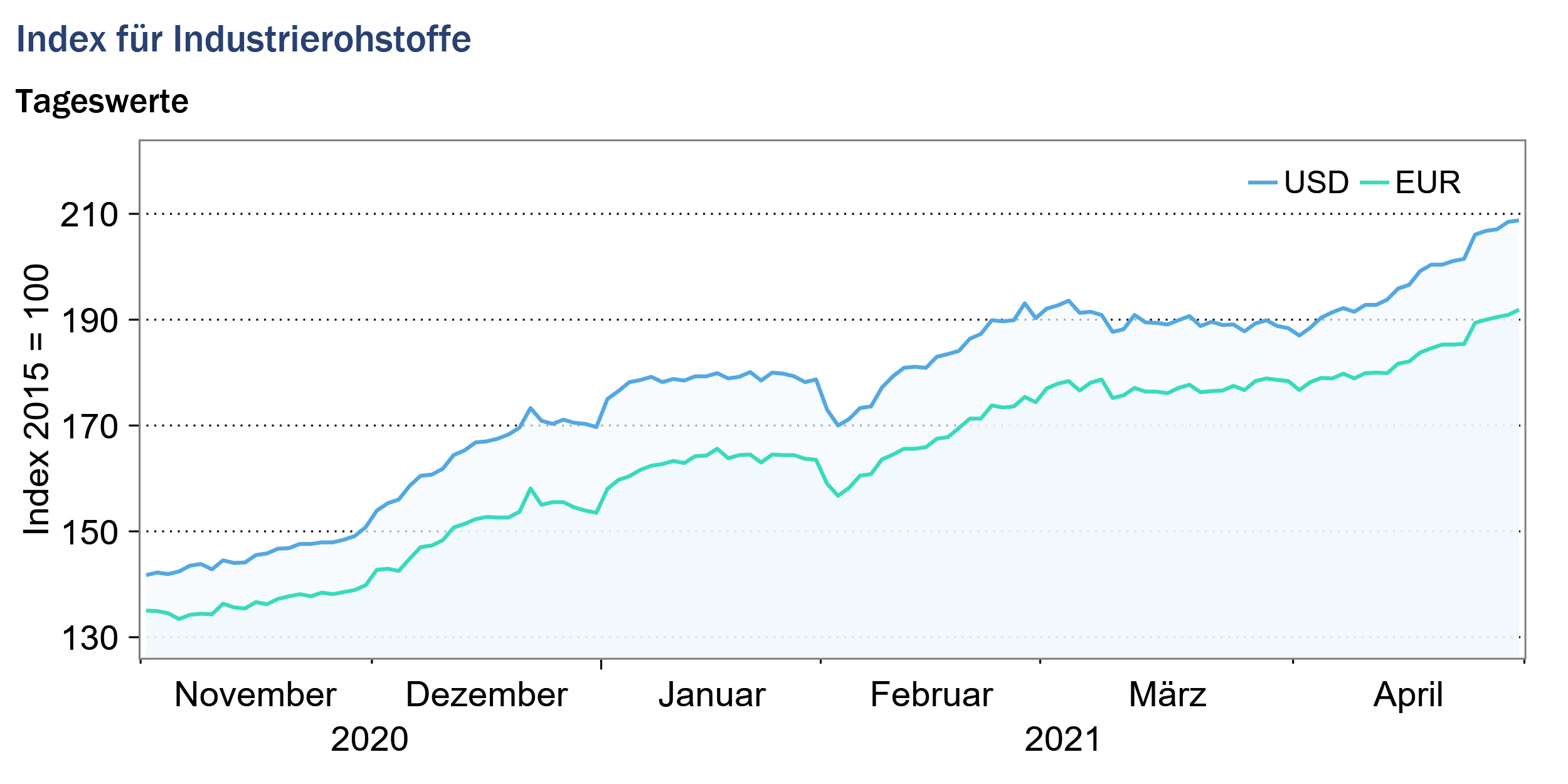 The sub-index for oils and oilseeds rose slightly on average compared to the previous month, due to price increases in the markets for soybeans, soybean oil and coconut oil. The prices reflected in the index for luxury foods also recorded mostly increases in April. While coffee, tea and sugar prices rose, only cocoa prices fell on average in April compared to the previous month. Coffee prices were driven by uncertainty about supply from Brazil. In Brazil, unfavorable weather conditions affected coffee cultivation and reduced the harvest. In addition, supply chain disruptions, including container bottlenecks caused by the Corona pandemic and the short-term blockage of the Suez Canal, tightened supply. Tea prices were also driven by tight supply due to production and supply difficulties caused by the rapid spread of the Corona virus in the producing country India. 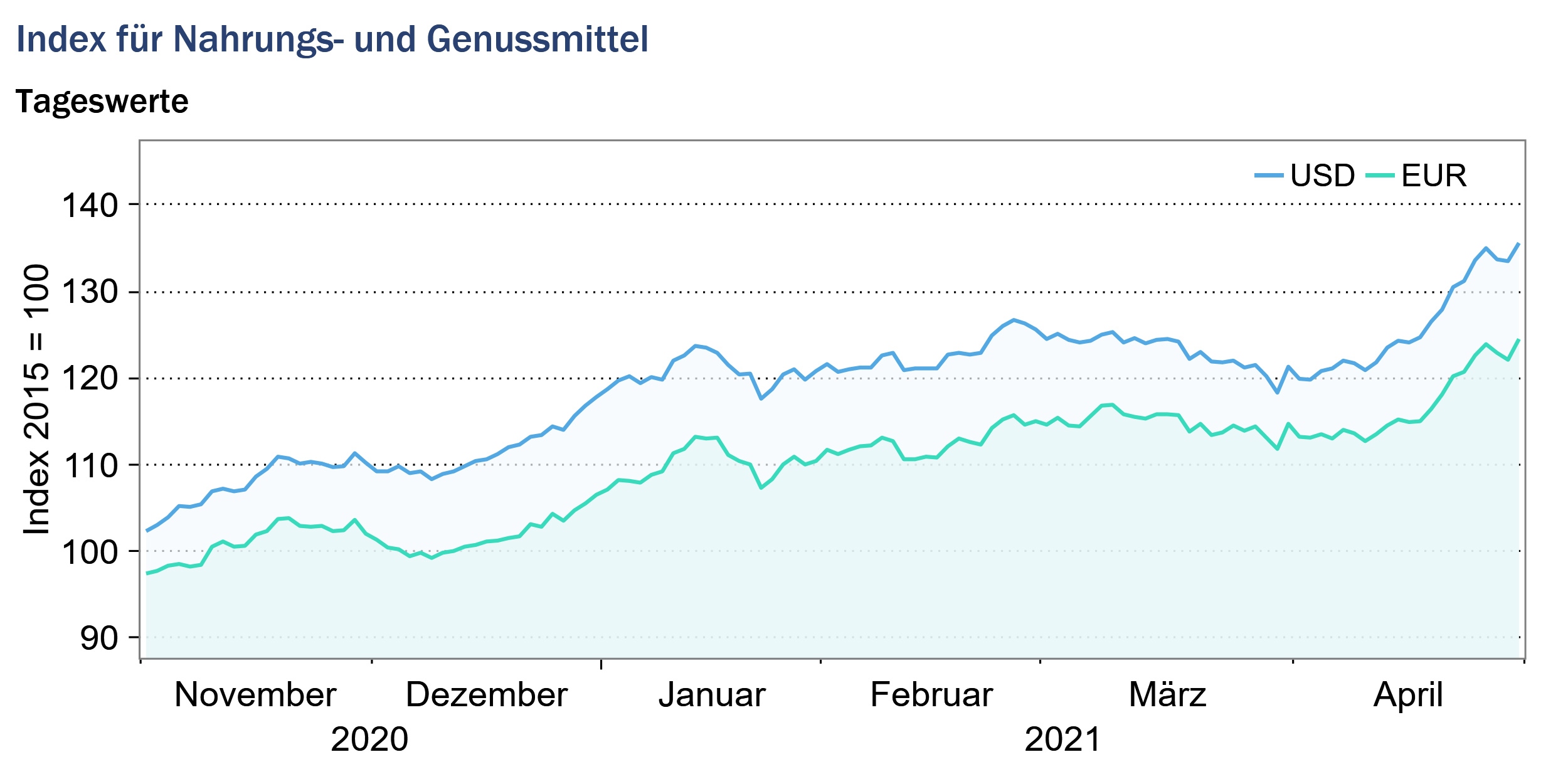 Creative purchasing: How to deal with supply bottlenecks and price…