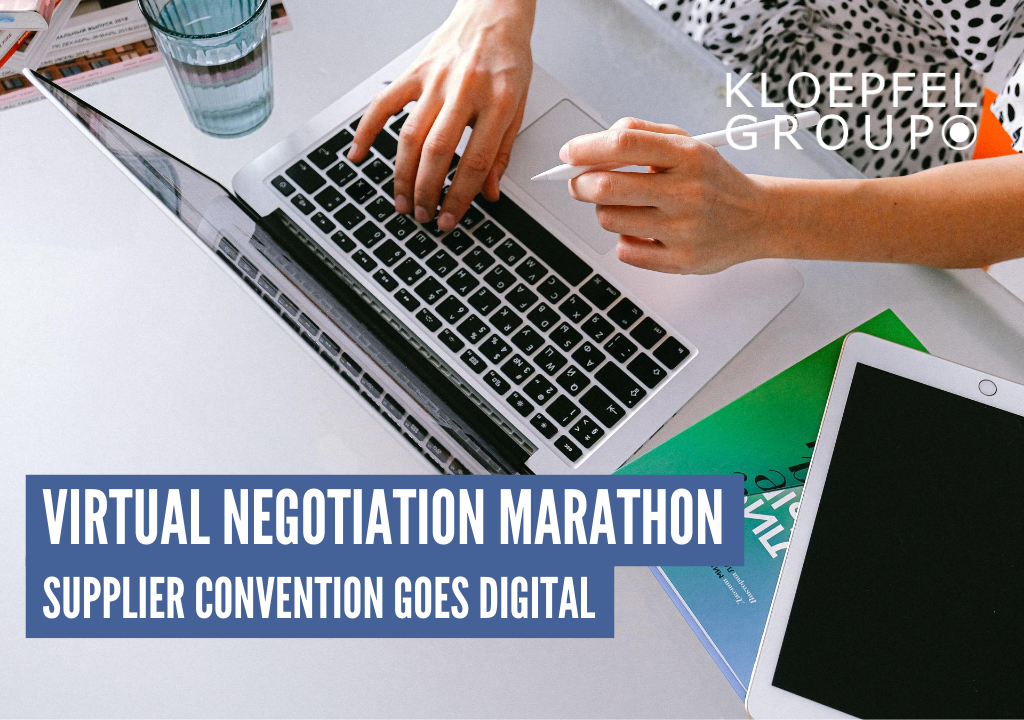 As many successful negotiations as possible in a short time – a Supplier Convention makes it possible. The concept: All suppliers of a customer are invited to a convention to jointly optimize costs. If everyone pulls together in the individual meetings, the business relationship is strengthened and win-win situations arise. Kloepfel Benelux has proven that this also works digitally in a project with Thetford Ltd. We talked to Peter Smit (Kloepfel Benelux) and Martijn Heijmans (Procurement Services).

1. Basically explained: What is a Supplier Convention?

The aim of a Supplier Convention is to conduct good negotiations in as little time and with as many suppliers as possible. For this purpose, the suppliers are asked to participate in previously scheduled negotiations one after the other and sometimes in parallel. We use this group dynamic to achieve the best result for the customer. This also – if not primarily – involves the suppliers: They must feel respected and understand the legitimate reason. Nine out of ten suppliers then respond sympathetically and openly to clear the way for savings. At the digital Supplier Convention for Thetford Ltd., we were able to achieve considerable savings in direct purchasing.

2. How does a digital Supplier Convention work?

It is important to clarify the common goals and conditions. We have made individual agreements with each Thetford buyer: What are the goals of each supplier? What are the walkaways? The teams then consisted of a Thetford buyer and a Kloepfel colleague on the one hand and on the other hand the decision-makers of the invited suppliers. We implemented the negotiations themselves through parallel Microsoft team meetings: There was always an internal meeting for consultation within the negotiating team for our customer – and an external one for the negotiations. We then switched between these virtual rooms on an ongoing basis, which is not unusual compared to face-to-face meetings. There are also “breakout rooms” for meetings when one party wants to discuss matters internally.

3. How much work does the client have to do?

Of course, we prepare together with the client, and we do this intensively. After all, the negotiations should not bring any unexpected surprises later – at least no negative ones. Because the entire spatial-organizational effort is eliminated in the digital world, which means that about one third of the effort is eliminated for the customer and you can really concentrate on the content.

4. What advantages can companies gain from a digital supplier convention?

A digital supplier convention requires less preparation: A personal meeting requires premises, catering, name badges, a reception, a waiting area, guided tours of the factory – all kinds of things. This is not necessary in the digital room and you save a lot of time and money. This can flow into the content preparation: a solid presentation of the event for the suppliers, the so-called “storyline”. The targeted preparations for the individual negotiations, the suppliers and their needs.

People do not need to travel. This means that the suppliers can be much more international. But even our customer Thetford would have been difficult to visit in the UK now. Furthermore, nobody has to wait their turn after the initial presentation on site but is called to their appointment in teams afterwards and can continue working normally until then. When meeting in person, it must be organized at this point that people have something to do – e.g. a waiting area where they have internet access and electricity for their equipment.

5. What were the lessons learned from the first Supplier Conventions with Thetford?

That it is worth it if the suppliers come 100% prepared. This must be communicated to them beforehand: Decision-makers must be on site and know what room for negotiation they have. That way, results can be fixed immediately. Then, that digital supplier conventions are extremely efficient. You put in less and get a comparable result.

6. How did customer and supplier perceive the Supplier Convention?

At the end of the day, everyone thought it was great. Of course, the suppliers also want to present themselves positively in the feedback, after all they are business partners – but the fact that there were one or two critical comments shows us that the feedback was honest. The suppliers were particularly positive about the second phase, in which we advise them on how to optimize their business – so they often make a profit in this way.

7. What was the biggest challenge and how was it solved?

To read as much body language and facial expressions as possible despite the digital distance and to create interpersonal closeness. Small talk is less self-evident than when people sit together in person, so you must be more proactive – this is how we communicate our honest interest in people and their company.

8. When or under what conditions should an analogue rather than a digital supplier convention be held?

At our customer Nooteboom we held an analogue supplier convention even before Corona. Outside the crisis this would still be the first choice, because there is only one branch office – with 80% of suppliers in the vicinity. Where many – international – suppliers are to be involved who are not on site and where the main aim is to save costs and time, a digital Supplier Convention is a good option.