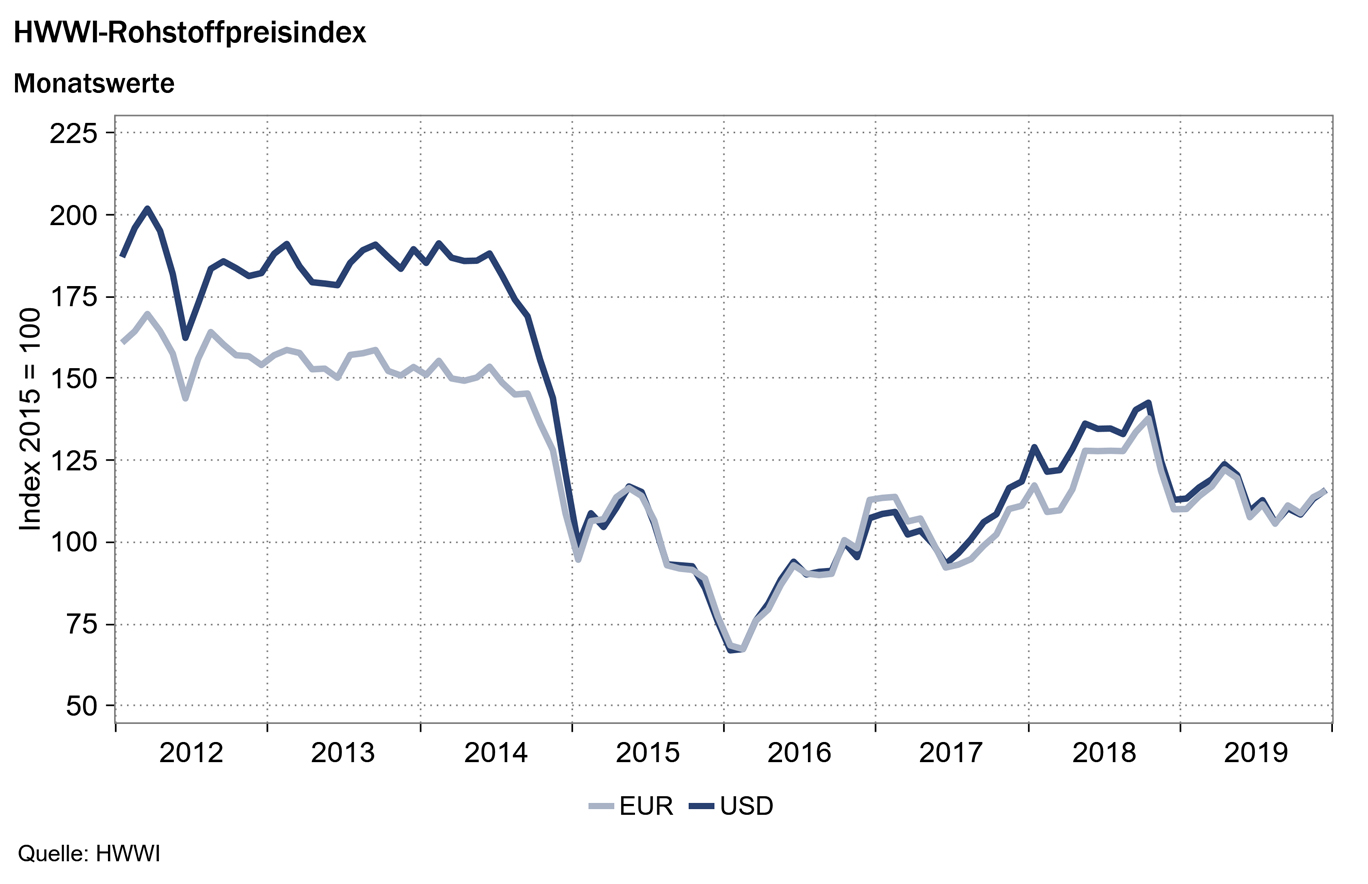 In order to mitigate the oversupply of crude oil and thereby support the oil price, further supply cuts were agreed at a meeting of OPEC+ members in the first week of December. OPEC, together with Russia and other partners, agreed to a further cut in oil demand of 500,000 barrels per day. According to the agreement reached in December, the OPEC+ states will in future produce 2.1 million barrels of oil per day less than in October 2018. The oil price, which had already risen in November due to market participants’ expectations regarding the outcome of the meeting, was pushed up again by the final decision at the beginning of December.

In addition, the IPO of Saudi Aramco, the world’s largest oil company, was completed in December. With an issue volume of USD 29.4 billion, this is the largest IPO worldwide to date. It remains to be seen what effects the IPO of Saudi Aramco will have on OPEC policy and the price of crude oil in the future. According to the news agency Bloomberg, Saudi Aramco, as a listed company, will aim to increase shareholder value and therefore maximize profits and sales. In order to demonstrate sales strength and drive up stock prices, Saudi Arabia will in future be keen to boost its own crude oil production, even if this means a drop in crude oil prices. An expansion of production by Saudi Arabia would lead to falling oil prices in the future. In December, the OPEC+ policy initially had a price-driving effect, so that the prices of all three types of crude oil (Brent, WTI, Dubai) included in the sub-index for crude oil rose on average in December compared to the previous month. The sub-index for crude oil rose by 4.1% overall (euro basis: +3.5%).

In contrast to the development of crude oil prices, the index for natural gas fell by 9.6 % on monthly average (euro basis: -10.1 %). The upward trend in European natural gas prices did not continue in December and prices recorded an average fall of 5.8 % (euro basis: -6.3 %) compared with the previous month. The price decrease is explained by the deal between Russia and Ukraine signed at the end of December. The transit contract between Russian state-owned Gazprom and Ukrainian energy supplier Naftogaz will secure gas supplies in Europe, especially Germany, for the next five years. The contract helped to avert potential gas supply bottlenecks in several European countries, which led to a drop in European gas prices in December. After prices for American natural gas initially rose in October and November due to fears of the approaching winter, they fell again in December. Contrary to November forecasts, temperatures in December were relatively mild in many parts of America, which reduced demand for American natural gas and depressed the price.

For reasons of climate protection, the use of coal-fired power is declining in many countries. In addition, China is increasingly relying on its own coal mining and is reducing coal exports. 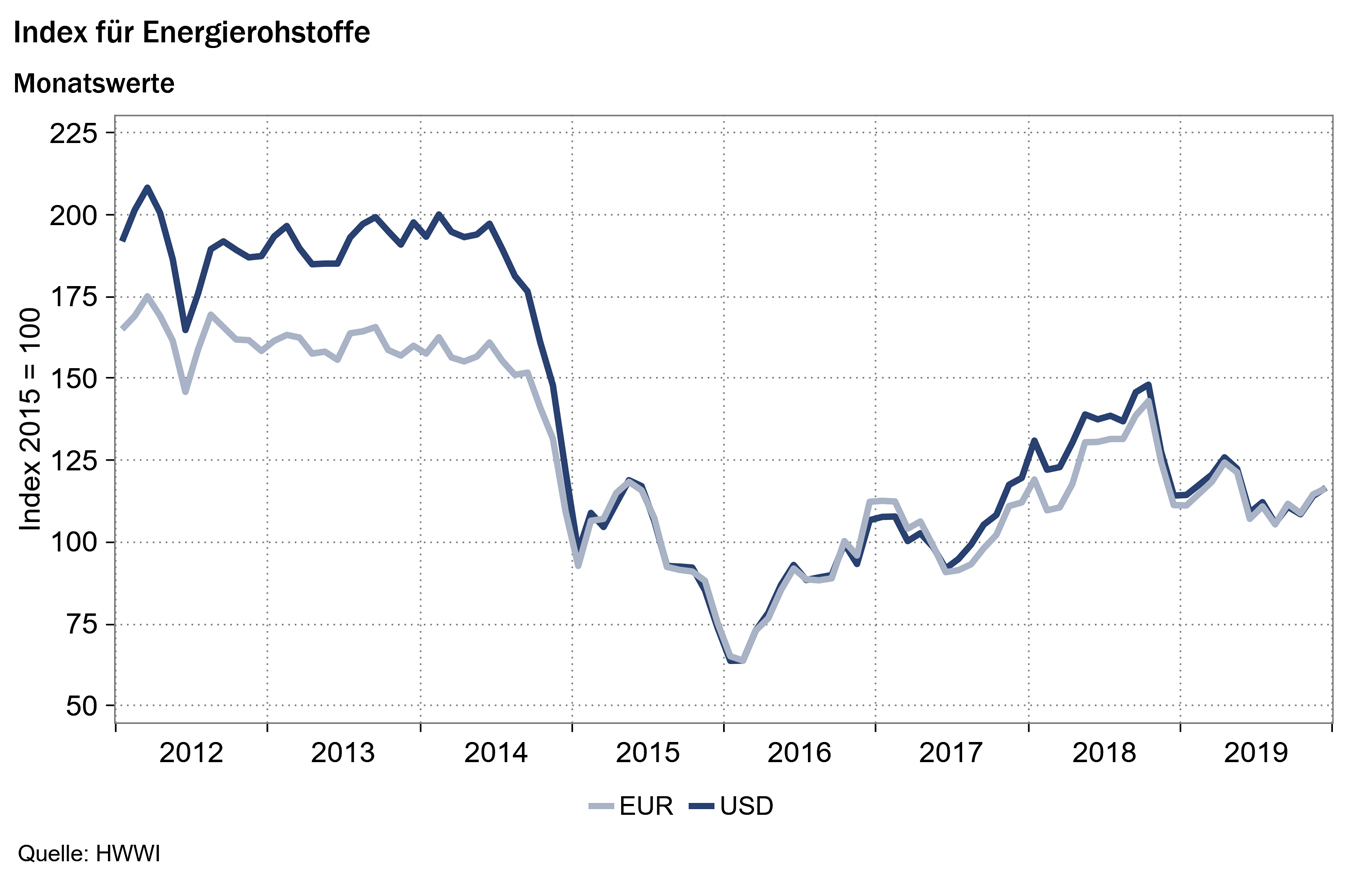 The sub-index for industrial raw materials is divided into the index for agricultural raw materials, the index for non-ferrous metals and the index for iron ore and steel scrap. The sub-index for industrial raw materials rose in December, which can be explained in particular by the significant price increases on the markets for iron ore and steel scrap. The prices of steel scrap, which had fallen in previous months due to the poor economic forecast, rose sharply again in December. The reasons for this increase are mainly due to the announcement of a partial agreement between China and the USA in the trade war that has been going on for over a year. In December, President Trump confirmed the signing of the agreement for January 2020. The partial agreement defuses the tensions between the two world powers and raises expectations for an improvement in the global economy and thus for an increase in steel production. Expectations of a future increase in demand for steel drove up prices for iron ore as a raw material for steel production and also for steel scrap that can be recycled into steel. The rise in the price of copper, which is often used as a barometer of economic activity, also indicates that the global economy is expected to improve as China and the USA move closer together. The index for iron ore and steel scrap rose by 10.4% (euro basis: +9.8%) compared with the previous month.

The index for base metals fell slightly in December in comparison to the previous month, which can be explained by the price reductions of the raw materials nickel, zinc and lead. Nickel prices have risen in the previous months despite the trade war between the USA and China, which led to an adjustment in the nickel price in December. Nickel is mainly used for the production of stainless steel. The production of stainless steel is currently declining worldwide, with the exception of China. The index for agricultural industrial raw materials also rose by an average of 2.4% in December (euro basis: +1.8%) due to the price increase on the rubber market. 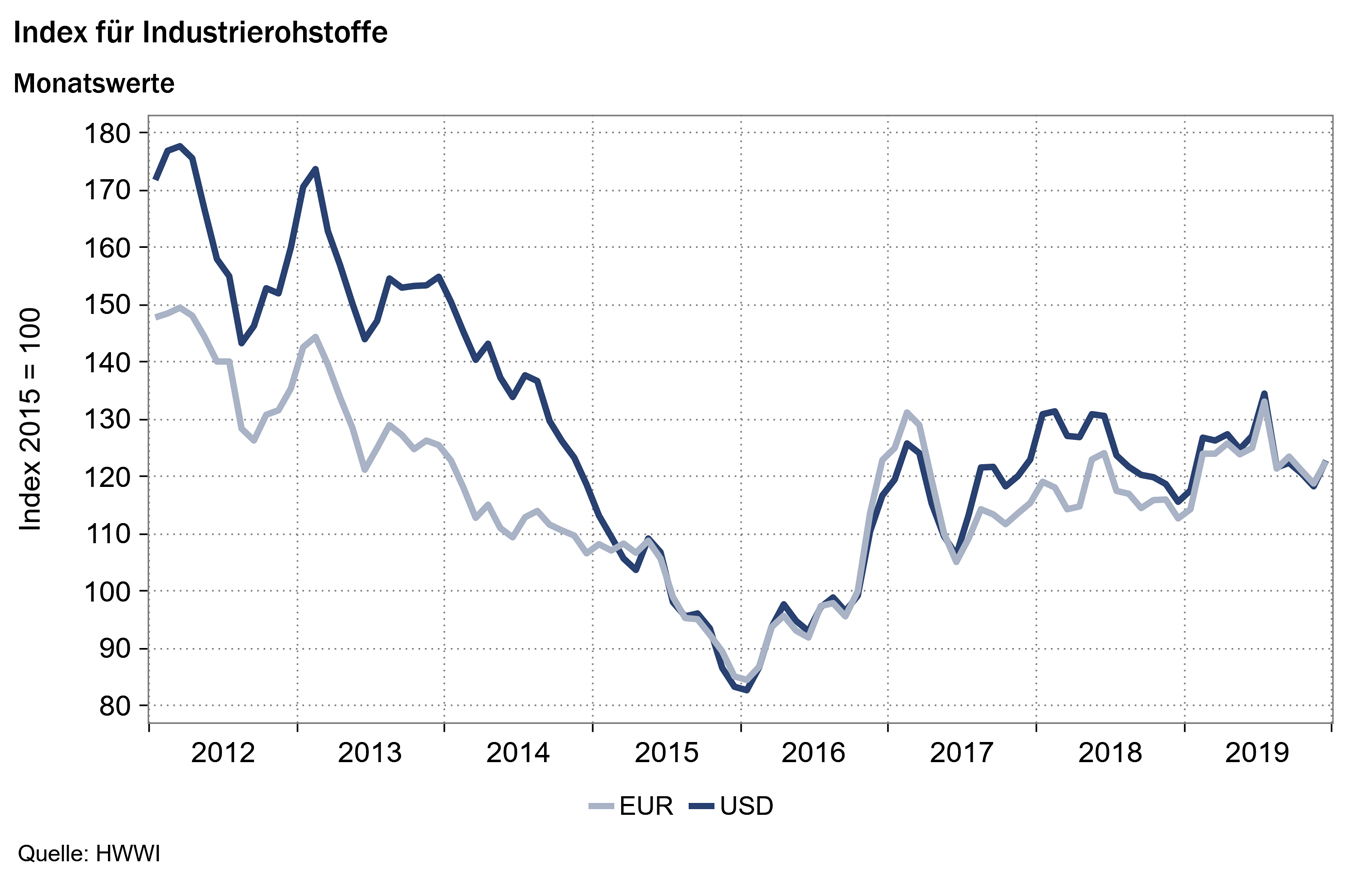 On a monthly average, the index for food and beverages rose on average. Compared with the two sub-indices of cereals and oilseeds, the sub-index for luxury foods recorded the strongest increase in December, which was mainly due to price increases on the coffee and sugar markets. The price of coffee rose significantly in December, as production declines are expected in Brazil and Vietnam in 2020. In addition, steadily rising coffee consumption in China is driving up demand and thus the price of coffee. Sugar prices also continued to rise in December as India, the world’s second largest sugar producer, announced that Indian sugar production will be significantly reduced in 2020.

Particularly sharp price rises were also seen in the markets for soybean, coconut and palm oil. The price increase for soybean oil is indirectly related to the effects of African swine fever. The decline in pig production led to a reduction in the demand for soybeans in animal feed production and thus to a lower supply of the by-product soybean oil, which is a by-product of animal feed production. The decline in supply of soybean oil caused vegetable oil prices to rise in December. The price of coconut oil continued to rise in December due to the steadily increasing demand for coconut oil. Coconut oil is increasingly used in the production of vegetable food and cosmetics. The price of palm oil also rose on average in December compared to the previous month, as demand for palm oil for the production of biofuels continued to rise. 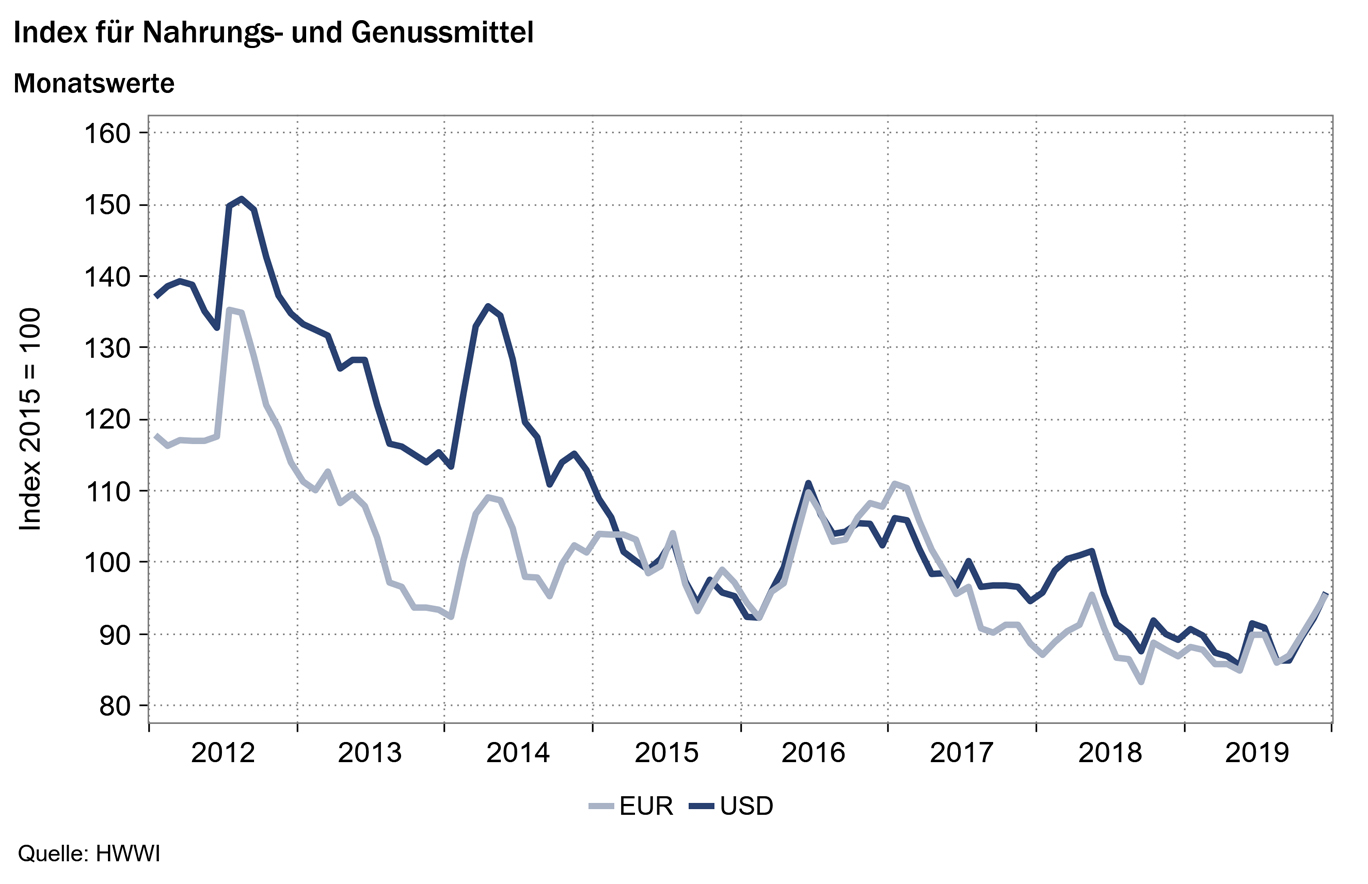 Sharp drop in prices on the raw material markets

Kloepfel Consulting awarded as “Beste Berater” for the fifth year…