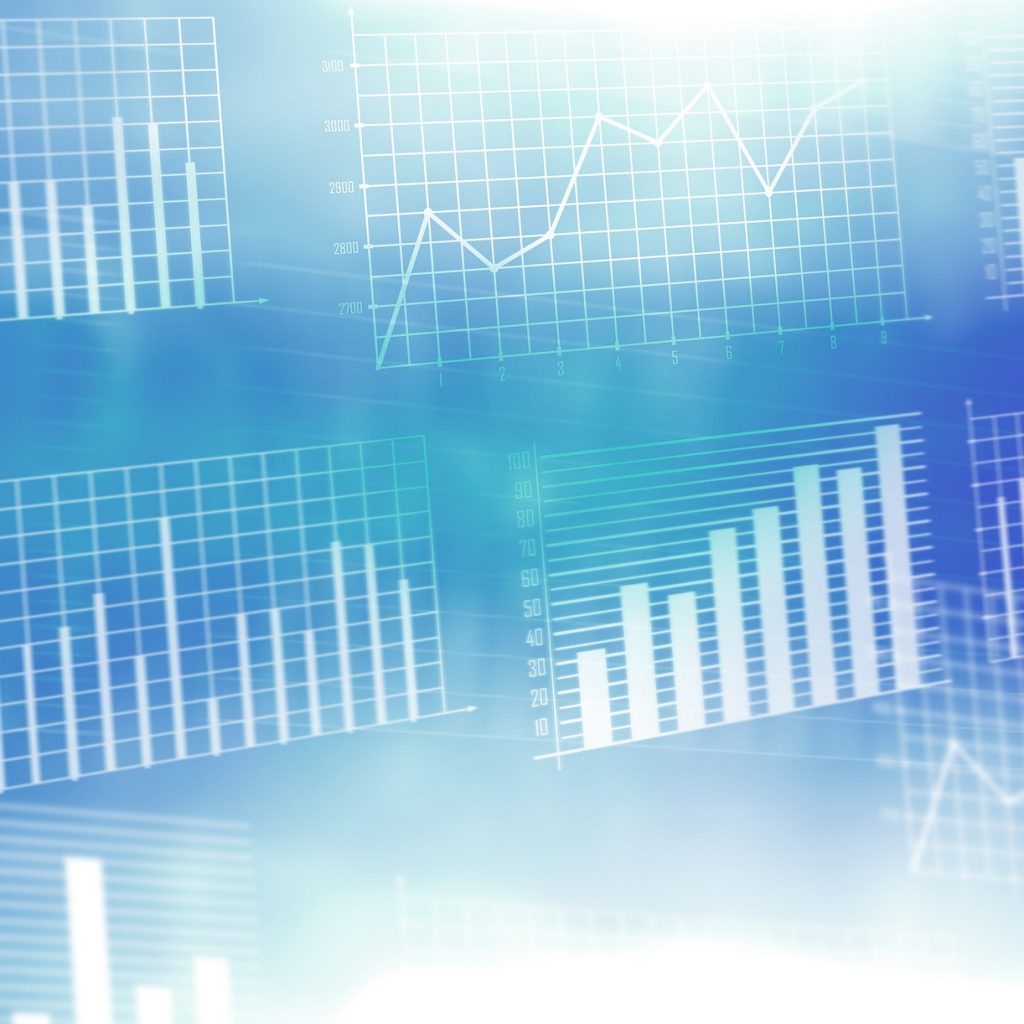 (Hamburg, January 11, 2022) The HWWI commodity price index rose by an average of 5.3% in December compared with the previous month. All three sub-indices of the HWWI Commodity Price Index, the index for energy commodities, the index for industrial commodities and the index for food and beverages, increased on a monthly average. The prices included in the index for energy raw materials moved in opposite directions. Prices for natural gas and coal continued to rise sharply in December, while crude oil prices recorded losses. On the markets for industrial raw materials, prices for iron ore and lumber in particular increased significantly. Prices for food, beverages and tobacco also increased slightly in December compared with the previous month, as the price of coffee, for example, continued its month-long upward trend. 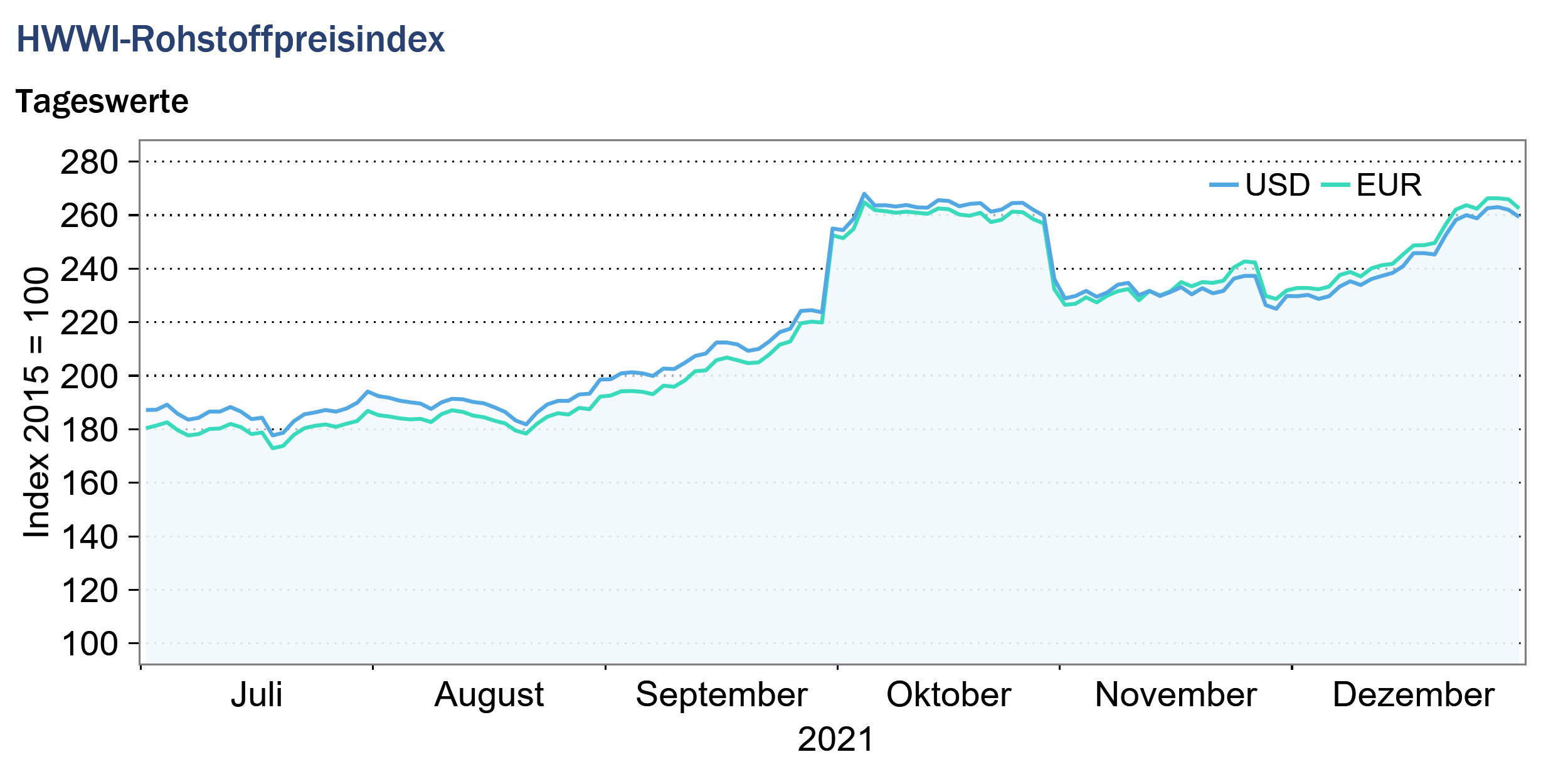 Crude oil prices continued to fall on average in December, reflecting uncertainty on the crude oil market with regard to rising corona infections worldwide and thus expectations of falling demand on the one hand, and rising supply on the other. Prices for European benchmark Brent crude averaged $74.91 per barrel and U.S. benchmark WTI crude $71.76 per barrel for the month. Crude oil supply was strengthened from three sides at once in December. Firstly, despite low prices, OPEC+ is sticking to its monthly gradual lifting of production cuts and increased daily output by a further 400,000 barrels in December as planned. In addition, the U.S. government brought crude oil from government reserves to the market, and third, U.S. producers expanded production as high crude oil prices in the fall made shale oil production seem lucrative again. In contrast, the global spread of the omicron variety increased uncertainty about crude oil demand trends. Lockdown measures and a worsened macroeconomic outlook could cause demand for crude oil to slump again in the future. 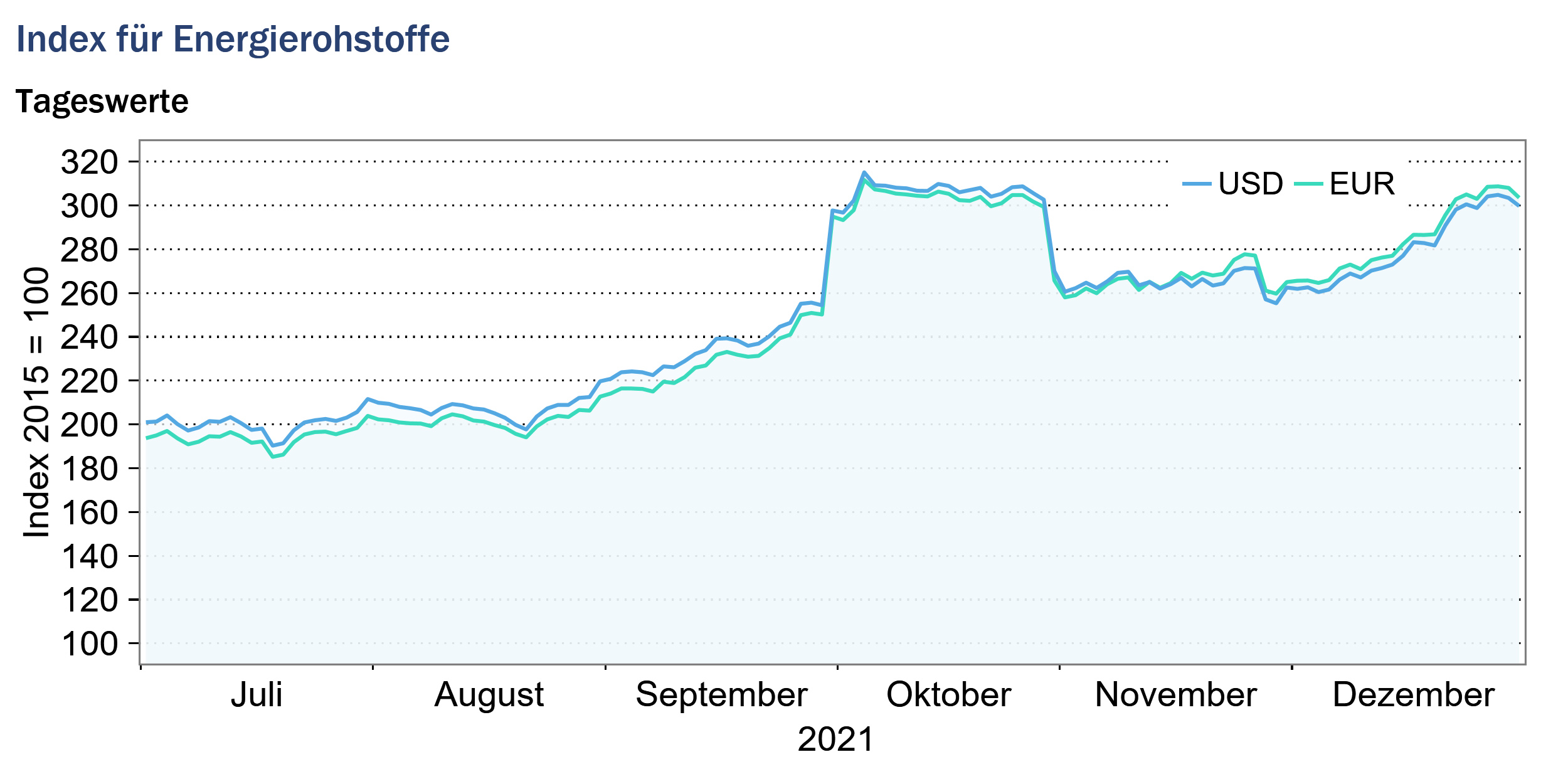 After the sharp price declines of recent months, iron ore prices picked up again for the first time in December, rising by 15% from the previous month. The decline in iron ore prices in recent months was due to Chinese steel production being cut back on the one hand to save electricity in view of the energy shortage and on the other to reduce the country’s CO2 emissions. Since the middle of November, iron ore prices have risen again as steel production in China is expected to increase again after reaching the emissions reduction target for this year.

Prices for non-ferrous metals recorded opposing trends in December. Prices on the markets for aluminum and zinc increased on average for the month. The continuing rise in prices for natural gas and coal caused a decline in energy-intensive production of the two metals. By contrast, prices for copper and lead fell on average in December compared with the previous month. Copper prices thus responded to market uncertainty caused by the rapid global spread of the new virus variant Omikron. The price of copper is considered an economic barometer and reflects expectations for the development of the global economy.

Lumber prices rose particularly sharply in December, by more than 30% compared with the previous month. The supply of lumber remained tight as transport routes were destroyed and sawmills closed as a result of flooding in Canada, a major lumber producer. The shortage of supply was met by high demand, resulting in a sharp rise in prices. 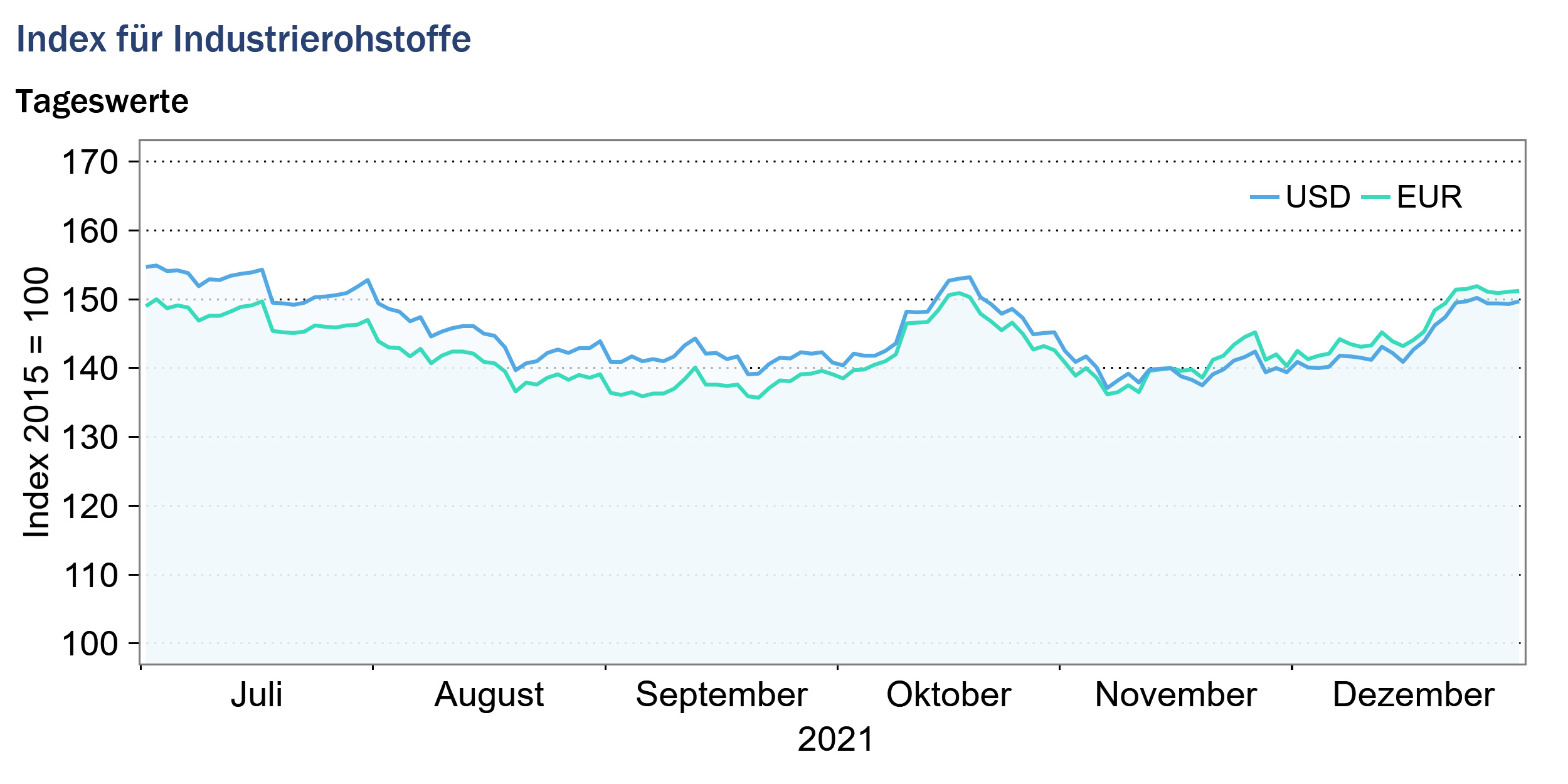 Corn and soybean prices increased in December from the previous month. The price increase was due to hot and dry weather in key growing areas in Argentina and southern Brazil. The weather is clouding crop prospects and causing prices to fall. Wheat prices, on the other hand, did not continue the upward trend of recent months in December. In its extensive crop forecasts, the United States Department of Agriculture (USDA) revised crop volumes upward in important producing countries such as Australia, Russia and Canada. The correction has been reflected in falling world wheat prices.

Prices for luxury foodstuffs again moved in opposite directions in December. While coffee and tea prices rose, sugar and cocoa prices fell compared with the previous month. The price of coffee continued its month-long upward trend, leaving its ten-year high behind. Supply from Brazil remains tight as poor weather conditions in key growing regions reduced the crop and global supply chains were also affected by the Corona pandemic. While supply remained tight in December, global demand for coffee was stable. 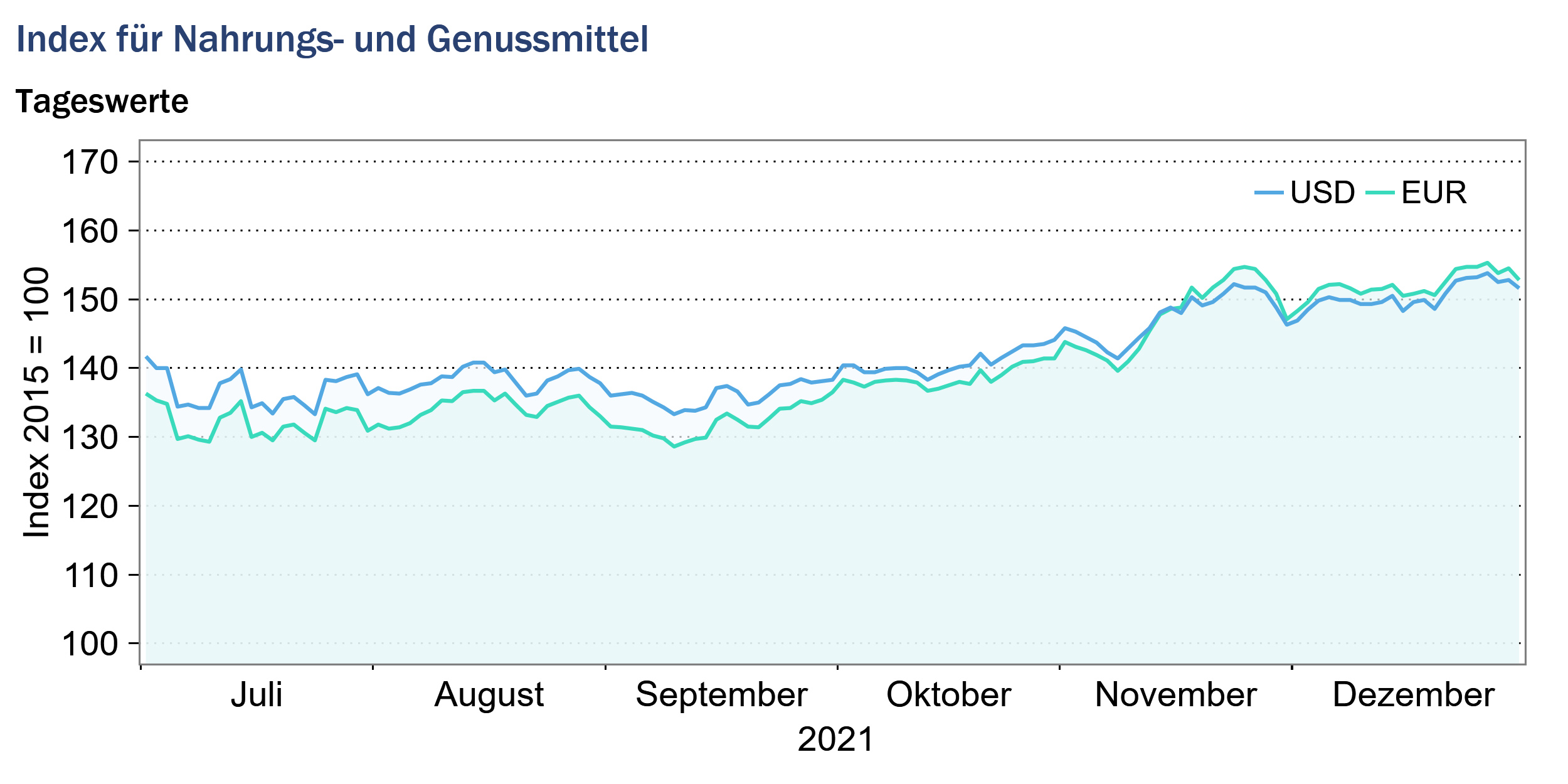 Price decline on the commodity markets